Paula Bohince: INCIDENT AT THE EDGE OF BAYONET WOODS 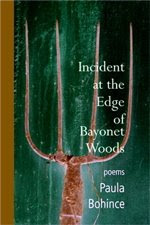 In the current issue of Valparaiso Poetry Review Diane Lockward reviews Incident at the Edge of Bayonet Woods, a collection of poems by Paula Bohince, as can be seen in the following excerpt and accompanying link to the complete review. In her examination Lockward explores Bohince’s complex but enticing development of suspense and mystery through the poetic use of techniques more often associated with prose fiction, such as atmosphere, plot, character, and setting.

Diane Lockward is the author of What Feeds Us (Wind Publications, 2006), which was awarded the Quentin R. Howard Poetry Prize. She is also the author of Eve’s Red Dress (Wind Publications, 2003) and a chapbook, Against Perfection (Poets Forum Press, 1998). Her poetry has been published in several anthologies, including Poetry Daily: 366 Poems from the World’s Most Popular Poetry Website and Garrison Keillor’s Good Poems for Hard Times. Her poems have recently appeared in such journals as Harvard Review, Prairie Schooner, and Spoon River Poetry Review. A former high school English teacher, Diane Lockward now works as a poet-in-the-schools.


Paula Bohince’s Incident at the Edge of Bayonet Woods is a stunning debut. Both a mystery and a lyric tour de force, the collection immediately takes a choke hold on the reader’s attention and never releases its grip. Poem by poem, Bohince unravels her dark story. In Section I we learn that the setting is a lonely rural farm located in the coal-mining country of Pennsylvania. Primitive and shadowed by history, the farm is characterized by mud, grime, cold winters, and poverty. The female speaker, following her father’s grisly murder, returned to this farm where she was raised, to live there and to claim her legacy of loneliness. In the poems, she struggles to get to know her father and to make sense of his life and death. Recalling the farm as it was years ago, she says, “I taste the odor of straw and millet released into fall, / the cursive of my father’s burning cigarette, / muslin curtain parting.” Thus, the stage is prepared for the father’s entry and the mystery’s unfolding.

While Section II introduces the suspected murderers and suggests a motive, Bohince deliberately leaves the narrative incomplete, a strategy that works well to pique and hold our interest. The motive is never more than speculation. The suspects remain merely suspects. There is no real solution to the crime. As our speaker attempts to reconstruct a story she does not fully know, she moves back and forth between present and past, affording us the pleasure of finding clues and reconstructing the story ourselves. As she tries to remember events from her childhood, she must acknowledge the fallibility of memory. In “Landscape with Sheep and Deer,” she says, “I must have dreamt it,” and she wonders, “. . . if there were deer, wouldn’t they have leapt over?” Bohince subtly places us in that oddly delicious and ironic spot of uncertainty.

Other smaller but seemingly important details, personal ones that the speaker does know, are also omitted; thus, the speaker herself remains somewhat a mystery. She has returned to the farm, but never tells us where she has been or for how long. She never makes reference to a mother. She tells us she is married, but provides no information about her husband. She speaks of herself as “twice married to the land,” and seems as much a bride to grief as to any man.

Bohince’s handling of atmosphere is masterful. While the story is rife with the potential for passion, little is expressed. In “Quarry” the daughter says it would be better “if I could quarrel with these rocks, woo outrage the way / I woo sorrow. // There ought to be a slow-forming fire somewhere, / not these pale mists, which are moths, which are offerings of light / to the foiled landscape.” She notes the “stubble of weeds waiting for some emotion to occupy it, / though emptiness is its own kind of balm.” Ironically, this emptiness serves to intensify the grimness of the story and to enhance the feeling of overwhelming loneliness. As the daughter woos a sorrow she cannot feel, we feel the damage that has been done to her.

The atmosphere is enhanced as Bohince reaches back into the past, a strategy that has the effect of adding ghosts to the story . . . .


Visitors are invited to read the rest of the review, as well as other works, in the Fall/Winter 2008-2009 issue (Volume X, Number 1) of Valparaiso Poetry Review.

Additionally, readers will find poems by Diane Lockward in past issues of Valparaiso Poetry Review: “April at the Arboretum,” “'How is a Shell Like Regret,'” “Last Dance,” and “Temptation by Water.” Lockward appeared as the featured poet in the Spring/Summer 2007 issue (Volume VIII, Number 2) of VPR, which also includes an interview with her by Sondra Gash.

Marketing automation is one of the most important parts of the business. Marketing is heavily integrated in order to make sales. When every company grows it, gets harder to have a one-on-one relationship with all your customers which now leads to wanting to the Digital Marketing