BEST OF THE WEB 2009: Contents and Ordering Info 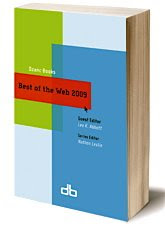 Executive Editor Dan Wickett of Dzanc Books has announced “the list of authors, titles and journals involved for the 59 stories, flashes, poems and essays that will be in Best of the Web 2009” anthology in bookstores next month. In addition, the publisher has made available a web page for pre-orders of the book, as well as a special 25% discount when also ordering the Best of the Web 2008 edition. Additionally, the web page includes a wonderful graphic with a sampling of the new anthology.

Once more, I am pleased to report that a poem from Valparaiso Poetry Review has been chosen to be included in this year’s anthology (guest editor: Lee K. Abbott, series editor: Nathan Leslie). Elise Paschen’s “Hive,” which appeared in the Fall/Winter 2008-2009 issue (Volume X, Number 1), was selected from among many hundreds of nominations across the entire spectrum of online magazines eligible for consideration.

The Best of the Web anthology series was started last year in an effort to spotlight excellent literature published in online journals. The publisher describes the collection: “this print anthology compiles the best fiction, poetry, and non-fiction that online literary journals have to offer in an eclectic collection in the manner of other broad-ranging anthologies such as Pushcart and Best American Non-Required Reading. This is the first substantial attempt at creating an annual print compilation of the best of material published online.”

I was happy last year to report two poems that first appeared in Valparaiso Poetry Review—“Prophet Township” by Jared Carter and “Walking an Old Woman into the Sea” by Frannie Lindsay—were honored by being chosen for publication alongside nearly sixty other works in that initial anthology of the series. I also was grateful to be able to add that one of my poems, “Island Fever,” which first appeared in Apple Valley Review, received a nomination from that journal’s editor, Leah Browning, and it also was selected for inclusion in the 2008 anthology.

As I have mentioned previously, I value all the poems and depend on all the poets in Valparaiso Poetry Review. Yet, I welcome the admirable efforts of the anthology’s editors to bring attention to the growing number of fine works being published in online journals. Indeed, as I observed in a recent post, “Online Literary Journals: Coming of Age,” I believe such attention informs readers and encourages writers to view online journals with increasing respect. Also, I am pleased when an opportunity arises for one of VPR’s splendid poets to reach a larger audience and find the greater recognition she deserves through inclusion in the anthology. Again, I congratulate Elise Paschen on the selection of her wonderful poem for this honor.

I was very pleased to find this site. I wanted to thank you for this great read!! I definitely enjoyed every little bit of it and I have you bookmarked to check out the new stuff you post. Resell SEO