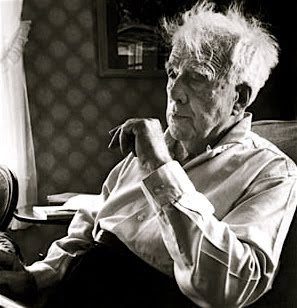 A little more than a week ago I commented in a post at An Author’s Assemblage on the passing of Richard Poirier, one of our finest literary critics, and I quoted comments from a remembrance published in the New York Times. Today, as I prepared for class discussion on Robert Frost in my Twentieth Century American Poetry course, I recalled one of my favorite descriptions of Frost written by Richard Poirier. The words were included as a brief preface to an interview of the poet by Poirier for the Paris Review in 1961, a conversation that was later collected in Poets at Work: The Paris Review Interviews (Penguin Books, 1989), edited by George Plimpton. Indeed, in some manner a few of the observations by Poirier, which begin by him discussing specifics about his meeting with Frost, are as interesting as many of the details within the content of the interview:

“Mr. Frost came into the front room of his house in Cambridge, Massachusetts, casually dressed, wearing high plaid slippers, offering greetings with a quiet, even diffident friendliness. But there was no mistaking the evidence of the enormous power of his personality. It made you at once aware of the thick, compacted strength of the body, even then at eighty-six; it was apparent in his face, actually too alive and spontaneously expressive to be as ruggedly heroic as in his photographs.

“The impression of massiveness, far exceeding his physical size, wasn’t separable from the public image he created and preserved. That this image was invariably associated with popular conceptions of New England was no simple matter of his own geographical preferences. New England is of course evoked in the scenes and titles of many of his poems and, more importantly, in his Emersonian tendencies, including his habit of contradicting himself, his capacity to ‘unsay’ through the sound of his voice what his words seem to assert. His special resemblance to New England, however, was that he, like it, had managed to impose upon the world a wholly self-created image. It was not the critics who defined him, it was Frost himself. He stood talking for a few minutes in the middle of the room, his remarkably ample, tousled white hair catching the late afternoon sun reflected off the snow in the road outside, and one wondered for a moment how he had managed over so long a life never to let his self-portrait be altered despite countless exposures to light less familiar and unintimidating. In the public world he resisted countless chances to lose himself in some particular fashion, some movement, like the Georgians, or even in an area of his own work which, to certain critics or readers, happened for the moment to appear more exotically colorful than the whole. In one of the most revealing parts of this interview, he said of certain of his poems that he didn’t ‘want them out,’ the phrase itself, since all the poems involved have been published, offering an astonishing, even peculiar, evidence of the degree to which he felt in control of his poetic character. It indicated, too, his awareness that attempts to define him as a tragic philosophical poet of man and nature could be more constricting, because more painfully meaningful to him, than the simpler definitions they were designed to correct.

“More specifically, he seemed at various points to find the most immediate threat to his freedom in the tape recorder. Naturally, for a man both voluble and often mischievous in his recollections, Frost did not like the idea of being stuck, as he necessarily would be, with attitudes expressed in two hours of conversation. As an aggravation of this, he knew no transcript taken from the tape could catch the subtleties of voice which give life and point to many of his statements. At a pause in the interview, Mr. Robert O’Clair, a friend and colleague at Harvard who had agreed to sit in as a sort of witness, admitted that we knew very little about running a tape recorder. Frost, who’d moved from his chair to see its workings, readily agreed. ‘Yes, I noticed that,’ he laughed, ‘and I respect you for it,’ adding at once—and this is the point of the story—that ‘they,’ presumably the people ‘outside,’ ‘like to hear me say nasty things about machines.’ A thoroughly supple knowledge of the ways in which the world tried to take him and a confidence that his own ways were more just and liberating was apparent here and everywhere in the conversation.

“Frost was seated most of the time in a blue overstuffed chair which he had bought to write in. It had no arms, he began, and this left him the room he needed.”

thank you for the blog, in an era of fast moving images and loud voices, it is a relief today to be reminded of the dignity of giants. The Auden poem was just what I needed.

Nice quote from Poirer, Edward. I was waiting for some of Frost's rumored bitterness to leak out, but only positives came through.