Wallace Stevens on Imagination, Escapism, and Difficulty in Modern Poetry 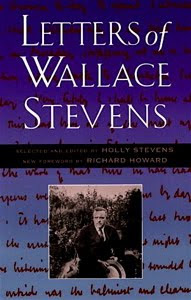 In recent weeks, I have been discussing the poetry of Robert Frost, T.S. Eliot, Ezra Pound, Wallace Stevens, William Carlos Williams, and other modernists with students in my Twentieth Century Poetry course. As I prepared for my classes, I have frequently returned to reading collections of the poets’ personal letters, discovering additional perspectives on the creative process and inklings of authors’ intentions explained in their own informal words. I have found these saved letters among the more useful tools in uncovering various feelings of these writers about their works during the period of composition. At the same time, I have been wondering about the future for scholars who might want to examine correspondence by notable figures in contemporary poetry. Since much of the communication between writers nowadays occurs through e-mail, facebook messages, or perhaps brief tweets, most of which are easily deleted on a daily basis without any thought, will there be a lasting record of poets, or novelists, engaging in written interaction to the extent that has existed in the past? As more journals accept, encourage, or insist upon e-mail submissions, and a great deal of correspondence between authors and their editors at magazines or publishing houses occurs online, even many of those missives will likely not survive far into the future.

Though those writers of the past may have had some qualms about elements of their intimate conversations included in correspondence becoming public, the collections of letters usually published posthumously under the guidance of relatives (ie. Letters of Wallace Stevens, selected and edited by Holly Stevens, or The Letters of T.S. Eliot, edited by Valerie Eliot) often provide frank, interesting, and informative details that enable better understanding of the authors’ methods of composition and expectations of responses from readers of their work.

For instance, as I review the poetry of Wallace Stevens again today on the occasion of his birth date (Oct. 2, 1879), I find a number of intriguing letters that reveal additional perceptions reflecting the poet’s viewpoint. Indeed, among an array of similar series of letters with others, for years Stevens participated in an ongoing conversation with Hi Simons, a critic and bibliographer of Stevens’ publications. The correspondence between Stevens and Simons began in 1937 and ended when Simons died of a heart attack in 1945, before the bibliography survey they had been constructing could be completed.

One lengthy letter sent from Stevens to Simons on February 18, 1942, contains an assortment of instructive and illuminating comments by the poet enhancing comprehension about topics he repeatedly reported as crucial in his works. Addressing the issue of imagination, Stevens states the following: “When a poet makes his imagination the imagination of other people, he does so by making them see the world through his eyes. Most modern activity is the undoing of that very job. The world has been painted; most modern activity is getting rid of the paint to get at the world itself. Powerful integrations of the imagination are difficult to get away from.”

Elsewhere in the same piece of correspondence, Stevens explains aspects of composition and reader response he sees as significant, as well as the difference between difficulty and obscurity in modern poetry: “Sometimes, when I am writing a thing, it is complete in my own mind; I write it in my own way and don’t care what happens. I don’t mean to say that I am deliberately obscure, but I do mean to say that, when the thing has been put down and is complete to my own way of thinking, I let it go. After all, if the thing is really there, the reader gets it. He may not get it at once, but, if he is sufficiently interested, he invariably gets it. A man who wrote with the idea of being deliberately obscure would be an imposter. But that is not the same thing as a man who allows a difficult thing to remain difficult because, if he explained it, it would, to his way of thinking, destroy it.”

As these three samplings from a single letter written by Wallace Stevens indicate, much can be garnered by investigating portions of the extensive documentation of prose contained in the collected correspondence of particular writers in the past. Unfortunately, although I believe readers and scholars someday will benefit by gaining new insights to the works of certain contemporary authors and their personalities through the writers’ preserved activities as bloggers or columnists for online journals that are archived, I believe evidence of informal reflection written by authors in correspondence distributed through electronic means might not be available as educational aids that could enlighten future generations of critics and scholars the way these volumes of collected letters by our past poets have served today’s readers.