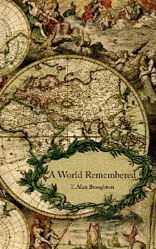 The current issue (Spring/Summer 2011: Volume XII, Number 2) of Valparaiso Poetry Review was released on Monday, and the featured poet in the journal is T. Alan Broughton. Visitors are encouraged to read a trio of his poems included in the new issue. In addition, I have written a review of Broughton’s latest collection of poetry, A World Remembered, published by Carnegie Mellon University Press. T. Alan Broughton has published four novels, a collection of short stories, and seven books of poetry. He also has been the recipient of various grants, awards, and fellowships, including a Guggenheim Fellowship and a National Endowment for the Arts Fellowship. I present the opening of my book review below:

T. Alan Broughton’s latest collection of poetry, A World Remembered (Carnegie Mellon University Press, 2010), offers readers an opportunity to witness some of the ways we might recognize, reflect, revise, and relish those elements of life that matter so much to us. Through memory, Broughton evaluates and elevates experiences crucial in his development as a human being, recording some of those moments that might have shaped his intellectual curiosity and emotional caring, qualities contributing to poetic discovery.

Broughton’s acute abilities to discern significance in incidents encountered or instances observed lend a sense of priority to the revelations and resolutions existing in his poems, even when occurring during seemingly minor everyday events. Similarly, Broughton’s practical knowledge, gained through decades of keenly questioning and recording the world around him, provides readers with unique views of not only the past but also the present situation in which he finds himself, as well as the future left for all of us to explore. Yet, the works in A World Remembered also suggest some mystery and suspense, especially about what is to come, a state of ambiguity and uncertainty that remains necessary for everyone.

In the book’s title poem, which appears as the first piece in a section designated as “Discoveries” that opens the collection, Broughton describes a sparrow caught in his garage after “taking refuge / in the dim cave while thunder raged.” When startled by the entrance of a man’s shadow, the bird “flew / toward light, beat wings and beak / on the vision of green and shade, / and the glass did not break.” The poet poses a comparison with the human soul “pressed to a place / it can see through, face and both palms against / the undiminished light, naming distant / leaves and fruits it thinks it knew— / but cannot go beyond.” The metaphor appears as a possible rebuttal to an example from Bede in Ecclesiastical History, which narrates a parallel occasion when a sparrow flies swiftly in one door of a hall and out the other, concluding this action resembles “the life of man; but of what follows or what went before, we are utterly ignorant.” Indeed, Broughton confides the bird in the original story might have flown from fields into the hall’s rafters, pausing “to nest / to feed its young,” before it takes light again “and flutters into a wall / it cannot see.”

Today the bird stays with me, as if I am moving through
the heron’s dream to share his sky or water—places
he will rise into on slow flapping wings or where
his long bill darts to catch unwary frogs. I’ve seen
his slate blue feathers lift him as dangling legs
fold back, I’ve seen him fly through the dying sun
and out again, entering night, entering my own sleep.

By the final lines of the poem, Broughton’s memory of the heron drifts into an example of imagination: “I try to imagine him / slowly descending to his nest, wise as he was / or ever will be, filling each moment with that moment’s / act or silence, and the evening folds itself around me.”

Repeatedly blending memory and imagination in his poems, identifying with those details he perceives in his surroundings, Broughton seeks to discover innovative glimpses of his position in the world around him and the world remembered. He even seems comfortable wrapped within the present as he interprets consequences of those slivers remembered from the past and projects bits of a conceivable future. Indeed, the poet realizes his visions of the past and his experiences or emotions as a young man supply some of the depictions of the present he furnishes readers. . . .

[Visitors are invited to read the rest of this review in the new issue of Valparaiso Poetry Review.]
Posted by Edward Byrne at Thursday, April 07, 2011