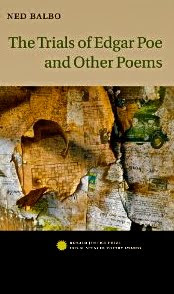 The new issue of Valparaiso Poetry Review, released earlier this week, includes Ned Balbo as the featured poet, and it contains a review by Angela Alaimo O’Donnell of his recent poetry volume, The Trials of Edgar Poe and Other Poems.

NED BALBO: THE TRIALS OF EDGAR POE AND OTHER POEMS


Ned Balbo’s new book, The Trials of Edgar Poe and Other Poems, is a brave foray into the sometimes terrifying world of childhood. The collection, which won the Donald Justice Prize in 2010, consists of 25 well-wrought formal poems, each one substantial and some (such as, “Hart Island,” a powerful blank-verse narrative at the heart of the book) qualifying as tour-de-force in terms of their deeply imaginative engagement of the subject and the deftness of the poet’s craft. In fact, this combination of grave content and lively formal wit characterizes the book as a whole, creating for the fortunate reader a world that is simultaneously haunting and high-spirited, woeful and playful.
Childhood is common ground every one of us shares—our center of origin, a landscape of intense, relentless, and rapid change wherein our hopes and fears, loves and antipathies, talents and weaknesses have their genesis and generation. Within its precincts, for better or for worse, we become who we are. This shared terrain, and our seemingly inexhaustible interest in exploring it, is one reason for the enormous appeal of Balbo’s work, past and present. Readers familiar with his previous work, particularly his first book, Galileo’s Banquet (1998), will recognize this as territory the poet knows well and has probed with characteristic sensitivity and nuance. (It is worth noting that Balbo’s first book won the Towson University Prize for Literature and his second, Lives of the Sleepers, won the Ernest Sandeen Prize in Poetry in 2005, thus establishing The Trials of Edgar Poe as the third in a trifecta of prize-winning collections.) In his new book, Balbo approaches his theme from a fresh perspective—or, rather, a series of fresh perspectives—as he narrates the circumstances of his own difficult childhood intermingling them with the stories of others who have endured loss, insecurity, and disillusionment at a young age.

Most prominent among the book’s afflicted children is Edgar Poe, a figure Balbo identifies with as a fellow-poet whose artistic disposition is related to the sense of abandonment he experienced as a child. In addition, the poet is drawn to a host of motherless, fatherless, and otherwise vulnerable creatures, including the actual, the historical, the fictional, and the mythic. From Frankenstein’s “son” to Batman’s orphaned apprentice, Robin; from James Whale’s hunted “Invisible Man” to Jules Verne’s hapless young Harry; from Fanny Allan (Poe’s foster mother and caretaker, herself an orphan) to Don O- (Balbo’s fatherless birth father)—and embracing even “the nameless dead” children buried by the thousands at Hart Island, New York City’s potter’s field—Balbo’s book gathers together a company of rejected, forgotten, and misbegotten souls whose identities and lives have been (de)formed and (mis)shaped by childhood circumstance. In the course of the book, childhood becomes a land of unlikeness that is also eerily familiar; thus, it should not surprise us when we find ourselves in these pages. . .


I invite visitors to examine the entire review of The Trials of Edgar Poe and Other Poems, as well as to read the rest of Valparaiso Poetry Review’s Fall/Winter 2011-2012 issue, the journal’s 25th issue.
Posted by Edward Byrne at Thursday, October 20, 2011