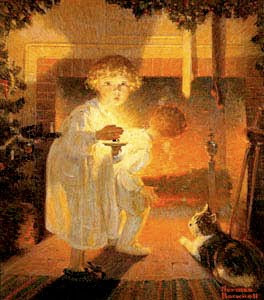 I will light the candles now.

Vachel Lindsay—a Midwesterner from Springfield, Illinois, who was born in a home once belonging to an in-law of Abraham Lincoln and where the just elected president received his farewell party before departing for Washington—lived a life that could provide Hollywood with an interesting script chronicling an engaging character. Throughout most of his adult years, Lindsay sought to present poetry in an entertaining fashion. Perhaps a predecessor to today’s performance poets, Lindsay traveled all across the country for long stretches of time, journeying mostly on foot in stints throughout the Midwest and along the West Coast, as well as hiking through Glacier National Park—an experience that resulted in a thematic book of nature poetry (Going-to-the-Sun, 1923).

He usually survived by singing or chanting his poems, written with characteristically strong rhythms, sonorous sounds, and distinctly incantatory language. As he traveled from town to town, he also traded printed copies of his pieces for food or a place to sleep. Indeed, he has been linked to Langston Hughes in their popularizing of musical lyricism based upon the rhythms of blues or riffs of jazz, and readers will find on the University of Pennsylvania’s PennSound site (located at the Center for Programs in Creative Writing) a treasure of audio recordings in which Lindsay can be heard performing his poetry.

This populist poet, often compared with fellow Midwesterner Carl Sandburg, viewed himself as a critic of contemporary society. In fact, Vachel Lindsay’s most famous and most infamous poem, “The Congo” (1914), represented his attempt to promote awareness of African Americans. In other poems he exposed the poverty and the plight African Americans faced under the social conditions they endured in the early twentieth century throughout the United States. Unfortunately, stereotypical depictions and racially offensive language (especially by today’s standards) included in the poem caused Lindsay to receive much harsh criticism, particularly from some in the black community.

However, Lindsay saw himself as an advocate for civil rights and would champion African Americans in other poems as well. He sent a letter to the chairman of the board of directors of the NAACP defending his poetry: “The third section of ‘The Congo’ is certainly as hopeful as any human being dare to be in regard to any race.” In fact, considering the work and the author’s intentions more favorably, Langston Hughes (whom it is said may have been discovered and promoted by Vachel Lindsay) later chose to anthologize the controversial piece. (Lindsay’s rendering of “The Congo” is one of those preserved among the samples at the PennSound website.)

After beginning college with a desire to follow his father’s footsteps as a doctor, Lindsay found more pleasure and personal satisfaction in painting. Therefore, like William Blake, he then turned to a career as an artist, studying at the Chicago Institute of Art and the New York School of Art, and as Blake had done, Lindsay sometimes claimed to have mystical visions he attempted to transform to images in his drawings.

Throughout his life, Vachel Lindsay exhibited eccentric behavior and held to idealistic thinking, hoping his work would eventually be well received and exert a powerful influence over many, leading toward social and cultural changes benefiting the weak and the forgotten. In 1913, Harriet Monroe published in Poetry magazine perhaps his most successful poem, “General William Booth Enters Heaven,” in which he elegizes the founder of the Salvation Army who had died in 1912. Composer Charles Ives made the poem even more famous when he set the it to music in 1914. (This poem also can be heard at the PennSound website.)

However, later in life when finally faced with intense pain of personal adversity and the prospect of professional failure because of an inability to attract great popular or critical attention for his newer poetry, Lindsay’s story came to a tragic end. In December of 1931, at the age of 52 and having returned to live in the same Springfield home where he had been born, suffering poor health and depression, he committed suicide by drinking a bottle of poison. Lindsay’s stature at the time was such that Edgar Lee Masters wrote a biography of him in 1935, but Lindsay’s importance as a poet has declined over the decades since then.

Nevertheless, in this December 80 years after his death, I invite readers to take the opportunity to recall Vachel Lindsay’s life with one of his works offering a more cheerful and festive spirit:

THIS SECTION IS A CHRISTMAS TREE

This section is a Christmas tree:
Loaded with pretty toys for you.
Behold the blocks, the Noah's arks,
The popguns painted red and blue.
No solemn pine-cone forest-fruit,
But silver horns and candy sacks
And many little tinsel hearts
And cherubs pink, and jumping-jacks.
For every child a gift, I hope.
The doll upon the topmost bough
Is mine. But all the rest are yours.
And I will light the candles now.

Thank you for this excellent essay. It has been years since I've read any of Lindsay's work. You remind us why it he is worthy of being remembered.